For the last year, D-Bop has been asking me to sign him up for karate so he can work on his Unagi. (Ok, that last part isn’t true, but I just really miss Friends.) I mean, the poor kid didn’t stand a chance since he has spent his entire life growing up in the very same neighborhood that The Karate Kid was shot, so I really can’t blame him.

But I’m still not excited about it.

A class that teaches your kid how to fight just doesn’t sound that appealing to me as a mother. And my knowledge of karate ends there.

So I decided to do some research (The Great Karate Class Search of 2014! Not to be outdone by The Great Kindergarten Search!) and learned that there are a lot of benefits as well. Improved focus, following instructions, blah, blah, blah, but what really got me is the part that it teaches kids about the importance NOT to fight.

Ok, as a mother of a boy, I am ABSOLUTELY TERRIFIED of the teenage years. I know, I know, everyone says that girls are way harder during that time and way more moody, but FIST FIGHTING. That’s what guys do. They beat each other up to deal with their feelings, then they go back to being besties afterwards.

That makes ABSOLUTELY NO SENSE to me.

So on this fact alone, I decided it was worth a shot and called a place right by our house (IT HAS TO BE GOOD IT’S IN THE KARATE KID NEIGHBORHOOD!) and learned that “when you sign up for karate, your goal is the black belt and you do not stop until you get there. If your son wants to play soccer, he continues with his karate as well. You always do karate.”

The next place I called had me take my son in for an interview to be sure he would be ready for the sacred art of karate. My brain heard, “FREE AIR CONDITIONED PLACE TO TAKE MY KID!!!!!!” and I made an appointment. (As you will soon learn about me, while I consider myself generous, I am also cheap, love good bargains, and can never pass up anything free.)

I took my son to karate and watched as he had a one-on-one test. He had to do lots of super intense listening exercises, and answer, “Yes Ma’am,” and “No Ma’am.” I watched in awe as this new world unfolded before me.

Someone in this world actually likes to be called “Ma’am”???

After the lesson (which D-Bop loved…and Cookie loved to– she of course punched right along with him) I was told the price. The EXORBITANT price. We are talking a monthly fee 5 TIMES THE AMOUNT of a gym membership, plus a $99 enrollment fee…and that deal was only available if I committed to 6 months. And he is required to go twice a week.

“We want to teach them about commitment.”

Ok, karate teachers, I get the idea of goal setting and the importance of teaching your child to stick with something and all of that jazz, but my son is 4. In about one more year, when he really starts sports, school and activities, my entire life is going to be spent in my Prius V shuttling my littles around LA to soccer practices, baseball games, choir rehearsals, piano lessons…you get the point…and I’m not ABOUT to give up MY FINAL YEAR OF FREEDOM early.

And when D-Bop grows up, right now he wants to be a gun-toting policeman robot. So I’m not 100% committed to making him achieve all of the dreams he comes up with at this age.

Thankfully, there is Chuck Norris. Chuck Norris is a MASTER of all kinds of martial arts, and he really helped popularize taekwondo. And my friend’s daughter is in a great taekwondo class.

We tried it out yesterday, and while he still has to do that entire “Yes sir, no sir” thing that I personally think is silly, he had a blast, he got to practice his kicks and punches like a true teenage mutant ninja turtle, and the class was a bunch of rowdy, smelly boys (and my friend’s sweet daughter) all having a great time while letting out some energy. And D-Bop has finally forgiven me for not signing him up at the EXORBITANTLY PRICED Ka-ra-TAY place. The class is the perfect balance of “learning a new skill and fun”, the price is right, and best of all THERE WAS A DEAL.

So thank you, Chuck Norris. 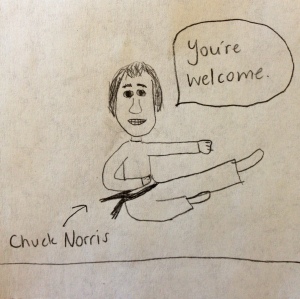 One thought on “Thank you, Chuck Norris”