Because I love Halloween so much, once September hit I got super excited and was SO READY FOR THE 105 DEGREE WEATHER TO BE OVER THAT MAYBE IF I STARTED TALKING ABOUT HALLOWEEN IT WOULD GO AWAY. So naturally I started asking D-Bop what he wanted to be.

I smiled. How cute. And there would be no way he would still want to be that next week.

But lo and behold, when I asked him daily over the next few weeks (because I’m cray cray), he gave the same answer every. single. time.

I started dreaming up fabulous ways we could make his costume. Cardboard turtle shells and homemade masks. I would splurge and let him buy a toy weapon for Donatello. We could paint his face. This was going to be great AND my dad was going to be so proud!!!

But when I told him my great plan he said, “That would look silly.”

I gasped for air and tried to hold it together. “Oh my God,” I thought. “Am I going to have to buy his Halloween costume this year?”

I took him to Toys R Us to check out the costume and he decided that the Teenage Mutant Ninja Turtles costumes were too weird looking. (I agreed and let’s segue here for a moment. Look, I know there is a lot of talk about problems with girl clothing and costumes, for good reason, but I’m confused why every single boy costume has 1) a mask that covers his entire face (which is SUPER SCARY to not have full vision while trick-or-treating in the dark on the scariest night ever) and 2) fake muscles. ?! Just because they are boys, they can still have body image issues if they never achieve muscles like their superhero costumes did when they were little.  I’m just saying.)

I was relieved he thought they were weird. But now what?

For the next 3 weeks, we went through so many ideas. Ninja. Stormtrooper. Spy Mouse. Jango Fett. We looked online at Target, Amazon, Party City, Spirit Halloween. 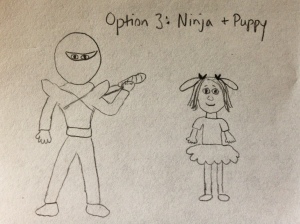 But nothing was doing it for him. Even worse, he was starting to get discouraged and completely stressed out about something that was supposed to be super fun. “It’s just so hard this year!” he said. “Last year I just knew I wanted to be a robot, but this year I just don’t know!”

So I threw all my energy into Cookie’s costume instead. After much pondering and online research, I decided on Little Red Riding Hood. I found an adorable cape from Gymboree (along with a wolf purse!) and we are using a dress that she already has. While yes, I am spending money, I can justify it because 1) I’m not buying the entire outfit and 2) both items will be used again for dress up and play. Double win!!

I showed Cookie’s costume to D-Bop and he said, “Why didn’t you just pick something for me?”

“Because we want YOU to pick your own Halloween costume,” I said.

“You could have just picked something.”

It was at that moment that I knew what I had to do. I had to swallow my pride, disappoint my dad, and take my kid to a Halloween store and let him pick his costume.

So we went to Aahs, and I’m not going to lie- I was pleasantly surprised. It was organized and they had pretty much every costume that you see online. We let D-Bop explore and study everything, and after about 20 minutes of walking up and down the aisles he decided on….drumroll please….Michelangelo from Teenage Mutant Ninja Turtles. Scary mask that covers his entire face and all.  (Although I must admit- when he came up to me with the costume on smiling from ear to ear through that mask, my heart melted and I of course found him adorable…even if I couldn’t see his face.) 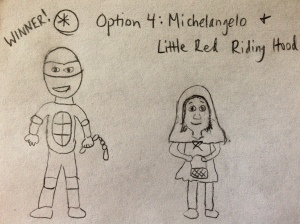 And Mac Daddy and I were THRILLED to see him happy about his Halloween costume again.

So after the costume, the nunchucks, and the Teenage Mutant Ninja Turtles Halloween basket, we were out 60 bones.

While I feel like a failure since I really didn’t achieve what I set out to do AT ALL (homemade costume AND something unique), I learned some valuable Halloween lessons along the way.

Hope you all have a happy, safe, STRESS FREE Halloween!